Raons de sang i foc, by Pep Castellano: A Review 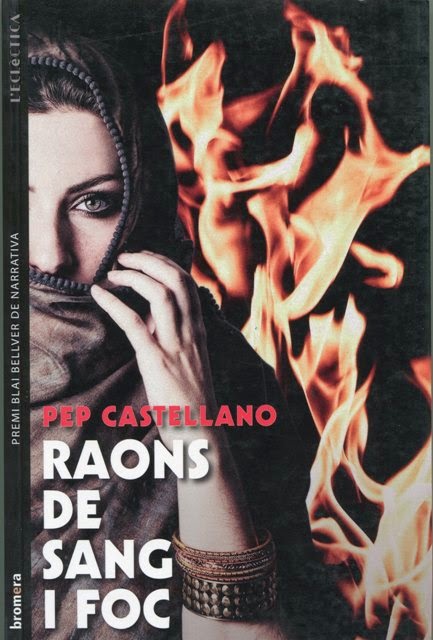 From a reader’s point of view – at least from this reader’s point of view – one of the most prized aspects of historical fiction should perhaps be the sense of verisimilitude characters can bring with them. It is not enough to provide accurate descriptions of the costumes, tools and other utensils that were used in the past; nor is it sufficient to give an enjoyable account of the historical events that constitute the backdrop to a given story. No, we probably want more: We want to hear the words, the accents, the idioms; we want to ‘feel’ the sounds that make a character even more credible to our eyes.

Widower Muhammad, a cobbler, lives in 16th-century Castelló with his only daughter, Saïda. She’s a real beauty, and works very hard to help her father in the tanning business. They are Moorish, moriscos, and in the early 16th century their social status is very low – the Valencian moriscos have become sort of pariahs in their own lands. They’re being targeted by the budding bourgeoisie made up of guilds of Christian craftsmen, while in the rural areas the aristocracy exploits them rather abusively.

When procuress Salma witnesses the rape of Saïda by her uncle Ahmed (nicknamed ‘Fartdevi’, i.e., Drunkard), she stabs him to death. With the help of Muhammad she does her best to pretend it has all been an accident (Ahmed, drunk as usual, fell asleep close to the hearth and got burnt), but the Deputy Governor, Jeroni, finds a bloodied shirt in the house and accuses Saïda of murder. Salma, a woman whom everyone seems to owe some favour of one kind or another, has always been very protective of Saïda, and somehow manages to convince him to keep quiet about the whole affair. As a result, they will all be blackmailed.

The times are tumultuous, to say the least. There is violence everywhere. The agermanats (city-based Brotherhoods of craftsmen and tradesmen) mercilessly ransack and destroy the Moorish quarter of Castelló and raid the village of Xivert, only to be crushed later by the mascarats’ army led by the Duke of Sogorb.
Raons de sang i foc is however a love story set against this historical backdrop of violence, wars and religious persecution. It is being told by Selma to her sister, a shepherdess who is a bit of an outsider, and who has apparently been attacked by soldiers and left mute. Selma (nicknamed Cerafina, i.e., Fine Wax) tells the love story of Saïda and Manel, apprentice to a tanner. Selma facilitates their trysts (her house is no bordello, though, she assures us) and helps them find a way to leave these troubled lands. “What woeful times we have had to live in, eh? Love and death go hand in hand, you see”, she tells her sister.

Against the widespread racial and religious prejudices that dictate the course of events, Manel and Saïda have not only to fight their own mistrust and prejudices but also pretend what they are not in order to survive.
Castellano’s real success in Raons de sang i foc is Selma. Her voice, her narrative tone, echoes across the centuries in her broad street talk, the idioms and proverbs she employs to describe other characters, to give advice to Saïda or Manel or to criticise the powerful, and also her sense of humour. With very witty dialogues, this is a book to read aloud. This is not only entertaining historical fiction but also a well-constructed narrative whose intrinsically oral qualities allow the reader to hear a 16th-century Moorish Celestina tell a story with flair. Let Selma take you back time. It is a worthwhile trip.