Dante's The Divine Comedy, translated by Clive James: A Review 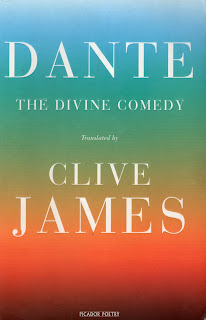 I confess to not having read Dante until now. I knew that the Divina Commedia is a 14th-century masterpiece and that it has influenced many a significant writer ever since it was published. When Clive James completed his lifetime project of translating it into English, I wanted to read it. His poetry I find extremely appealing and exquisite. How would an Australian poet manage such a huge challenge? I felt curiosity, even though the book has taken years to make it to the top of my reading list.

As a translator, I am aware that verse translation is an extremely demanding task. An oft-repeated dictum (thanks, Robert Frost) is that poetry is what gets lost in in the translation. When James took up the challenge of translating 100 Cantos, he was not only demonstrating his literary courage but also showing off his poetic skills. Was his decision not to include footnotes beyond the audacious? Was it doomed? The answer is no.

Every future student of translation should read his introduction to his massive effort. He sets out to make the poem acquire the fluidity in English that the original Tuscan Italian has. His most significant decision (and probably the most successful overall) is to write Dante into quatrains: abab, cdcd, and so on and so forth. Only the last two lines of every Canto are rendered as couplets.

To a 21st-century reader, however, the Divine Comedy is not as appealing a book as it would have been to Dante’s contemporaries. His is a realm of mostly spiritual, religious concerns which I have very little interest in, to be honest. What appeals me in this massive book is its lyrical qualities: the rhythm, the sparkle, the energy he infuses into his translation.

And yet it is true the brilliance is not everywhere across the book. Expecting absolute perfection throughout its 100 Cantos would be unreasonable. James skilfully shifts between formal and less formal registers. He does not translate for scholars but rather for ordinary readers. Having had the chance to translate Shakespeare into contemporary Spanish, I know how hard the challenge is, and how rewarding it can feel even when the translation is less than perfect.

I’ll quote one fragment, an example of what I mean by sparkle, freshness, and brilliance. It’s the beginning of Canto 8 from the ‘Purgatory’:

Now was the hour that longing turns around,

For sailors, towards what they left behind,

The hour that melts their hearts when, outward bound,

For just one day, the last light brings to mind

That they have said goodbye to dearest friends;

The hour that pierces the new pilgrim deep

With love, if he should hear what the bell sends

From far away, the sound of chimes that weep

In mourning for the dying day. It ends

As James’s reader, I am grateful for a translation that aims for readability, that eschews the footnotes and the scholarly paratext that normally accompany classics in our time. Highly recommended.